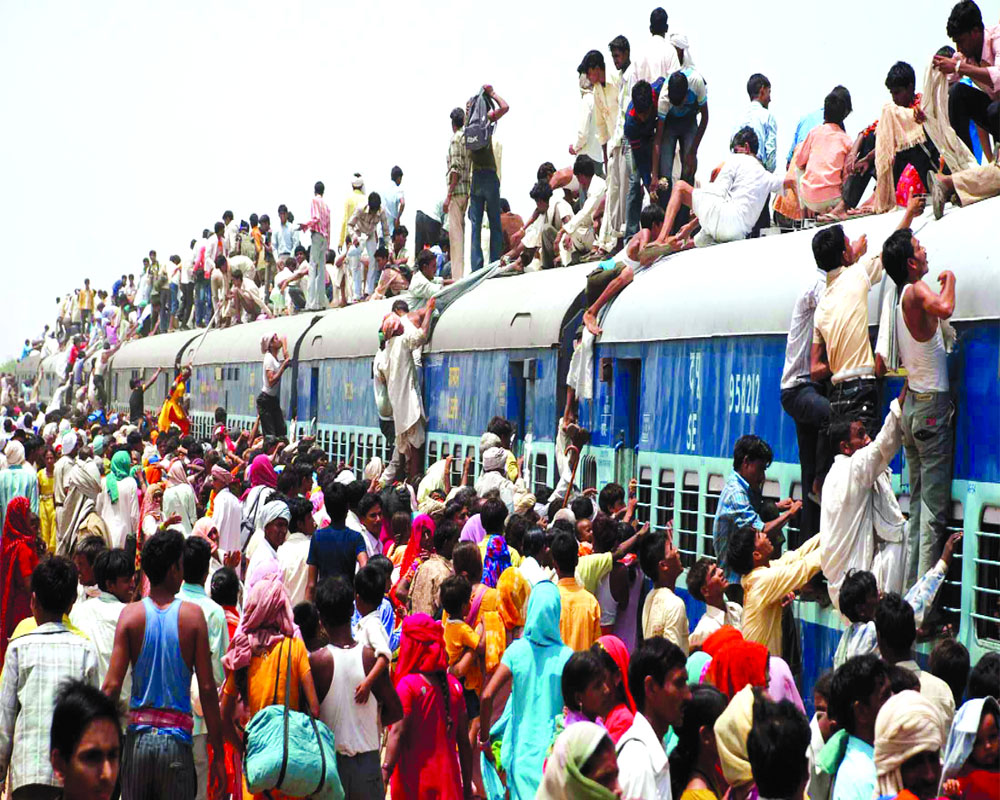 With the global population estimated to touch nine billion by 2050, the huge surge is identified to be the causal factor of developmental concerns in several countries

When the world’s population reached five billion on July 11, 1987, it was observed as the “Five Billion Day” by the United Nations (UN). Taking inspiration from this, the then Governing Council of the United Nations Development Programme (UNDP) for the first time in 1989 launched an initiative to observe July 11 as the World Population Day to draw attention towards the urgency and importance of related issues. As population explosion began to take centrestage as a cause of serious concern, the themes of the World Population Day focussed on the health problems faced by childbearing women and the importance of family planning, gender equality, poverty, maternal health and human rights. With the current global population at 7.8 billion and estimated to touch nine billion by 2050, the massive surge in population is identified to be the causal factor of developmental concerns in several countries. It becomes more conspicuous for developing and lesser developed countries. Therefore, World Population Day assumes paramount importance because it highlights the problems of population explosion and raises awareness about the effects of over-population on the environment and the planet. This year’s theme is to raise awareness about safeguarding sexual and reproductive health needs and vulnerabilities of women and girls during the COVID-19 pandemic. This is very timely and significant because many pregnant women succumb to poor reproductive healthcare. A study by the UN Population Fund (UNFPA) revealed that 800 women die every day during the process of childbirth. The research highlighted that if the lockdown continues for six months, with continued major disruption to health services, then 47 million women in low and middle-income countries might not have access to modern contraceptives. This would, in turn, lead to seven million unintended pregnancies. This could lead to a rise in gender-based violence, female genital mutilation and child marriages and thus threaten the transformative results attained thus far in raising the health conditions of women.

India’s concerns: The concerns for India on this World Population Day are clear. It has just two per cent of the world’s landmass and 16 per cent of the global population. Between the Census of 2001 and 2011, the country added 18 per cent more people to its population — translating to around 181 million. It is the second-most populous country in the world with an estimated population of around 1.37 billion by 2019. According to the Population Division of the UN Department of Economic and Social Affairs, India is expected to add nearly 273 million people in the next three decades and surpass China’s population within the next seven years. In this context, the importance of sexual and reproductive health of women and planned parenthood underscores some major concerns for the country.

Poverty and illiteracy: These factors also contribute immensely to the population explosion. In particular, children in rural areas are considered a blessing and support for parents in their old age, while in poorer families, more children mean more wage earners. On the other hand, the level of girls’ education has a direct impact on fertility, as it is evidenced that the fertility rate of illiterate women tends to be higher than that of those who are literate. Lack of education prevents women from having full knowledge about the use of contraceptives, of the consequences of frequent childbirth as well as of their reproductive rights. On the other hand, educated women understand their rights and choices of contraception, are often vocal against early marriage and choose not to have many children. In India, female (39 per cent) illiteracy was almost twice than male illiteracy in 2011.

Family planning and other social factors: Even after 69 years of the creation of the National Family Planning Programme, the pattern of family planning has not changed much in the country. The National Family Health Survey (2015-2016) revealed that the use of condoms declined by 52 per cent over eight years and vasectomies fell 73 per cent. Added to this, women still lack the power to negotiate and choose if they are willing to get pregnant or wish to give birth to a baby, whether it is a boy or a girl. Preference for male children by families is still prevalent in the overwhelming patriarchal society in the country. In this process, a woman ends up being pregnant multiple times and producing many children till a male child is born.

Total Fertility Rate: TFR is the average number of children born to women during their reproductive years. For the population to remain stable, an overall TFR of 2.1 is needed. Hence, a TFR of 2.1 is known as the replacement rate. India has witnessed a steady decline in its TFR, which touched 2.3 in 2016. However, there is a huge variation across States and the income level of people. Poorer States like Bihar (3.2), Uttar Pradesh (3.1), Jharkhand (2.7) and Rajasthan (2.7) still have TFRs above 2.5, while the poorest household has a TFR of 3.2 children per woman compared to 1.5 children per woman from affluent families. This shows that population growth is more concentrated in economically weaker sections of society and poorer regions of the country.

High youth unemployment: India has the highest youth population in the world, i.e. around 28 per cent of the total population. This youth potential is often referred to as the “demographic dividend” which means that if the youth available in the country are equipped with quality education and skills training, then they will not only get suitable employment but can also contribute effectively towards the economic development of the country. Every year around 25 million people enter the workforce, but only seven million are able to secure jobs, resulting in huge unemployment rates. Around 18 per cent of the young labour force is unemployed in the country today and around 33 per cent of the total youth are not in employment, education and training (NEET), which is the highest in the world. This huge unemployed and NEET category of youth are turning the demographic dividend into a “demographic disaster” for India.

The way forward: Population growth constantly acts as a hurdle in effectively addressing the problem of poverty, hunger and malnutrition and in providing a better quality of health and education, with limited resources. COVID-19 has accentuated these challenges and also raised concerns on the timely attainment of the UN Sustainable Development Goals (SDGs). It is, therefore, important to understand that in order to have a better future for all on a healthy planet, attainment of the SDGs is critical.

Family planning is an effective tool to ensure a stable rise in the population, which in turn is crucial for the achievement of some of these SDGs. The Government at all levels — Union, State and local, citizens, civil societies as well as businesses — must take the responsibility to promote awareness and advocate the sexual and reproductive rights of women and encourage the use of contraception. This would go a long way in ensuring that every child who is born would prove to be an asset for the country, as all the research shows that investing in family planning and well-being measures have significant benefits over per Rupee spent vis-à-vis other investments.

Additionally, the key stakeholders need to be committed to well-researched planning and implementation on how to harness the population growth for the maximum economic benefit of the society and country. Providing adequate education and training to the young population would make them productive, effective and competent, thereby making them key contributors to economic growth. The World Population Day, 2020, is an opportune time to discuss these important issues and raise awareness about safeguarding sexual and reproductive health needs and vulnerabilities of women and girls during crises like the pandemic, so that corrective measures can be taken to overcome these challenges towards the vision of New India and an Atma Nirbhar Bharat.

Population explosion must be next target