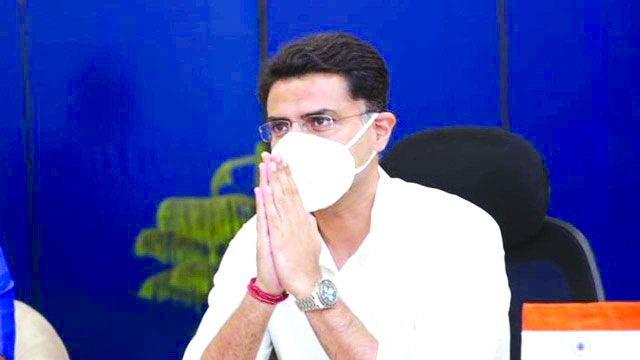 Gehlot has numbers but Sachin Pilot has the perception and goodwill. Congress will suffer a body blow if he leaves

That ego wars have killed the Congress is old news. What’s new is that it considers its factionalism as a championship round in an arena between suitable claimants to leadership and revels in the challengers it produces as an asset rather than a weakness. Challengers mean a second rung is ready and the top leadership can be held in check. And both can be used against each other. To the point that even when it is on the brink of disaster, now beginning to lose its State Governments despite a verdict in its favour, it refuses to acknowledge challengers who become the new winners and turns them into rebels. This is exactly what has happened in Madhya Pradesh and now in Rajasthan. This feudalistic pursuit, of course, flows from its dynastic leadership that wants to be feted as the only hope of a party of warring chieftains. The old warriors, who have unquestioningly accepted the primacy of Gandhis in deciding what’s good for the party, humoured them even, have sought satrap status to rule over their home turfs on their terms in return for delivering election results. This mutual prosperity flourished till the political landscape itself changed to reward a more ground-up, fresh-faced and performance-driven parties and leaders. The Congress didn’t even bother to broadbase its own structure by way of holding organisational polls, leave aside transforming itself. Even when Rahul Gandhi assumed leadership with his peers like Jyotiraditya Scindia and Sachin Pilot to usher in a new wave, it was merely cosmetic. Scindia and Pilot though chose to live down their dynastic entitlements and in their mid-40s, desperately wanted to create their own political legacy. To that extent, both gave up their comfort zones in Delhi and worked the ground in their States, resurrecting Congress fortunes in the process. But both were never given what they wanted, the chief ministership of their States despite delivering a winning verdict. The Gandhis were more scared of a senior revolt that would be difficult to quell than handling disappointed Young Turks, who being Rahul’s friends and confidants, could, they thought, be won over. The Gandhi scion ultimately kowtowed to his mother Sonia Gandhi’s propensity to go with old loyalists rather than risk them holding the party hostage by threatening breakaway units and worse, undercutting it. Rahul would never rebel because even the old hawks would endorse him so long as they continued their free run and left him to face the critique and responsibility of Congress fortunes. So there’s no fight left for Rahul, who by the way has a soft corner for Rajasthan Chief Minister Ashok Gehlot, too. The likes of Pilot, Scindia and Milind Deora resented being castaways who would have to wait perennially for their time to come as the old guard maintained status quo. And invested in politics as a career, they are now leaving the grand old party, one that has left thinking seniors like Kapil Sibal and Shashi Tharoor wondering if the party stables would be empty after “the horses had bolted.”

Sachin Pilot has been deeply invested in Rajasthan, getting the verdict for the Assembly polls in 2018, when even Gehlot wasn’t good enough to manage the scoreline, and ensuring favourable returns in the panchayat polls that came soon after the mammoth May 2019 verdict for Modi. Yet Gehlot got the chief ministership, partly because of his history with Indira Gandhi who always trusted his organisational skills and partly because of his hold on a sizeable number of party cadres with whom he could break away. This ability to rustle numbers is also the reason why he was able to parade about 100-odd MLAs in a show of strength compared to Pilot’s claim of having about 30 MLAs, enough to dislodge the Government. Pilot’s strength, the high command thought, has been incremental and he was, therefore, convinced to be his deputy. But Gehlot has never been one to share power or yield some degree of autonomy, hemming in Pilot’s administrative powers by appointing crony bureaucrats in his ministries. Still Pilot held on, while disenchanting his own supporters who had bargained for some stake in the new dispensation. Matters came to a head when despite the Congress win in the Rajya Sabha elections, Gehlot accused him of toppling the Government and sent police summons to him for conspiracy. Pilot is a reluctant leaver and the Congress cannot afford to lose him so soon after Scindia flocked to the BJP. In fact, given the testimonials, the public perception and emotion are with Pilot even though he may not parade numbers. What will Pilot do? Joining the BJP won’t help much, considering he won’t be made Chief Minister either with aspirant Vasundhara Raje not expected to lie low. He could float a regional outfit but would still have to make a hard choice of supporting the BJP, which is keeping a hawk’s eye on proceedings. Negotiating within the Congress is unlikely to give him much of legroom. But yes, by quitting, he could give the Congress a body blow and become a trigger for younger leaders like him to make copycat moves. The Congress needs him more. Censuring him won’t stop the drift in the party.

“It is Not Militants Who Need to be Killed, But Militancy”

Back to the Old Guard Sonia Gandhi