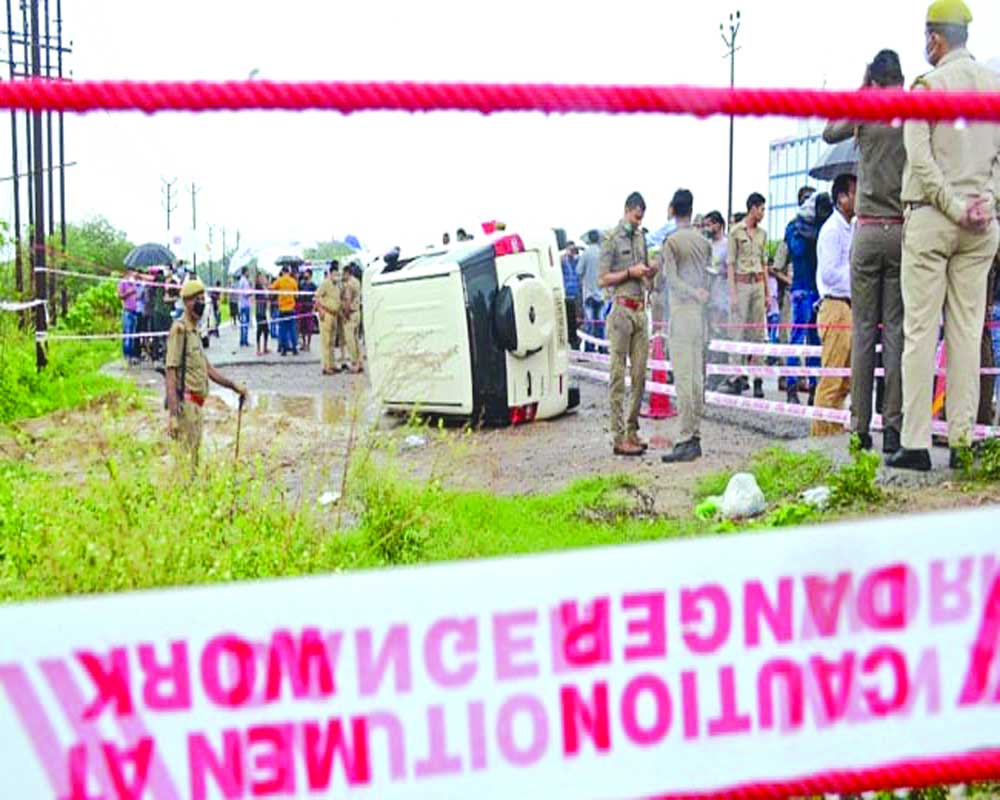 The so-called steel frame of bureaucracy has developed jelly in its spine, which is out to please our political masters. A systematic overhaul is needed to avoid Dubey-like encounters

India’s most wanted gangster Vikas Dubey is dead. The police encounter may have raised several questions even as politicians, civil rights activists and human rights workers have called it a “cold blooded” murder. But the fact remains that over 100 families rejoiced as the news about Dubey’s encounter reached Bekaru — the non-descript village in Kanpur — where his fiefdom ran large. Sweets were distributed and the family of the eight policemen, who were martyred on July 3 in an ambush, expressed satisfaction, saying justice was finally done. Even Dubey’s parents disowned him and said he deserved what he got.

The saga that started on the night of July 3 ended on the morning of July 11 but the episode has many twists and turns. Many high-profile actors — who puppeteered Dubey behind the scene — may have heaved a sigh of relief following his killing. They continue to be safe and unseen. This is why this encounter will not bring an end to the criminal-political nexus, which thrives in every gram panchayat of Uttar Pradesh and which, according to lawmakers, is an elixir of Indian politics, one that has kept the political system going.

The story of a young man, having political ambition, entering the blind alley of crime to follow the orders of his political masters is not new in Uttar Pradesh. “Yeh gaon gaon ki kahani hai (this is the story of every village),” said a lawmaker with a wry smile. A few hundred rupees in one’s pocket, a motorcycle and caste backing are enough to turn any youth, jobless and restless, into a short-time criminal. In a matter of years, he would qualify to become a full-time criminal. Sometime later, he could start contesting the elections and even win the Assembly or the Lok Sabha polls. Sometimes, even from jail.

Dubey’s story is no different. He and Lallan Bajpai, who was the head of the Shivli nagar panchayat, were friends but in 1996, differences cropped up between the two. During the Assembly election, Bajpai supported Santosh Shukla of the BJP while Dubey supported Bahujan Samaj Party (BSP) candidate Hari Kishan Srivastava. Shukla lost that election. This widened the gap further. In 2001, Dubey tried to acquire land near the Shivli Inter College where he wanted to develop a market. When the manager (Sidheshwar Pandey) opposed, Dubey killed him. Then Dubey attacked Bajpai, killing three of his men, though the latter survived.

The same year, on October 12, Dubey killed Saroj Shukla inside a police station where the latter took shelter following a brawl . In reality Dubey had stage-managed this episode with his contacts in the forces to corner and eliminate him. Despite the grisly crime being committed in the afternoon and that, too, in the presence several cops, Dubey’s terror was such that the police witnesses turned hostile during the trial. The irony was that even the investigating officer turned hostile — this has probably never happened in the annals of any criminal investigation.

Little wonder then that the strongman’s criminal prowess soon attracted political attention. Dubey was happy to oblige and dabbled in village and panchayat-level politics. He was first elected as the pradhan of a village and later became the member of district panchayat with the backing of  two regional parties. After he decided to distance himself from politics, his wife took over the mantle and was elected as the district panchayat member. She, too, was elected with support from a regional political party. Gradually, Dubey ensured that his relatives got elected in local-level elections.

Chaubeypur in Kanpur city being a Brahmin-dominated area, Dubey’s caste added more strength to his muscle power. He preferred being called panditji — as Brahmins are addressed in rural Uttar Pradesh.  He was a big catalytic factor in Mayawati’s famous Dalit-Brahmin social experiment. With a change of Government, Dubey switched loyalty to the Samajwadi Party (SP) and then to the BJP. At one time, Dubey even claimed that Behenji (as Mayawati is known among her supporters) had called him by his first name in a crowd of 500 people. His influence was so entrenched in the region that he would hold kangaroo courts where his word would be the only law. Those who did not abide by what he said were beaten up by his cohorts. Even when the police demolished his mansion and started an investigation against him with vigour, people of almost eight villages were afraid to talk to the police.

The police officials are quite  candid to admit that had Dubey not been eliminated, he would have become a lawmaker — may be in 2022 (Assembly election) or 2024 (Lok Sabha). His political clout would have gone up. He would have engaged the sharpest of legal brains in India and would have proved in the court that he was not present in Bikaru village on July 3. Dubey would have also got a reprieve like he got in the 2001 murder case. In 2003, the then Mulayam Singh Government did not even challenge the lower court’s order in the High Court.

All of this is not a new story in Uttar Pradesh. Dubey has only brought a new dimension to the political-crime nexus where short-term criminals, who hold sway in 10-12 villages and can influence a few thousand votes, hold the key to any election. Earlier, criminals preferred to stick to one party. But Dubey was different. Instead of clinging to one party, he preferred to change the party flag on his car mast as the Government changed in Uttar Pradesh. He never joined any political party.

There are people like Hari Shankar Tiwari, Virendra Pratap Shahi, Mokhtar Ansari, Atiq Ahmad, Brij Bhushan Saran Singh, Rama Kant Yadav, Uma Kant Yadav and Raghuraj Pratap Singh — the list is endless — who, despite having criminal antecedents, continued to win the elections, both Lok Sabha  and Rajya Sabha. In the mid-1980s, Hari Shankar Tiwari and Virendra Pratap Shahi created waves when they won the elections from the jail premises. But this was just the beginning. Tiwari even became a Minister while Shahi was gunned down in the 1990s.

All these tainted names carry a Robin Hood image as they help the local people financially in getting their daughters/sisters married. In turn, they live in safe mansions surrounded by bodyguards belonging to the same or nearby villages or their own caste/religion. For them, it’s easy to earn money as they run a lucrative contract business and also have shares in Government contracts for the construction of roads, dams and bridges in their respective areas. In Government parlance, it is called the “mafia share.” It’s an open secret as to who the main beneficiary is in the corridors of power. Later, the dons graduate to running big criminal operations, including extortions and kidnappings and if required, murder.

This criminal-political nexus finds its reflection in the 2017 Assembly elections, too. In its report, the Association of Democratic Reforms (ADR) had said that 143 legislators — 36 per cent of the total strength of 402 — have criminal records against them. Of this, 107 — 26 per cent of the total strength — are facing murder charges. Who gave these criminals political patronage? Why do voters elect these tainted leaders despite the ADR educating them about such criminals?

The time has come for some serious introspection. Is it only the political system that’s responsible for this rot? If the nexus between the criminals and politicians is deepening, this is the time for the judiciary to stand up and deliver. Government records suggest that till 2018, 10.27 lakh cases were pending in various lower courts in Uttar Pradesh alone. Delayed justice means the criminals can walk away. This was very much evident in the case of Dubey, who, despite facing 60 criminal charges, including that of the murder of a Minister-rank leader, was roaming free, building his empire.

The common perception is that the police arrests only the aam aadmi and spares the powerful. Ditto is the case with the judiciary. The so-called steel frame of our bureaucracy has developed jelly in its spine, which is out to please its political masters than the people. We need a holistic change in all sectors where crime is crushed at the very beginning so that we do not birth more Dubeys.